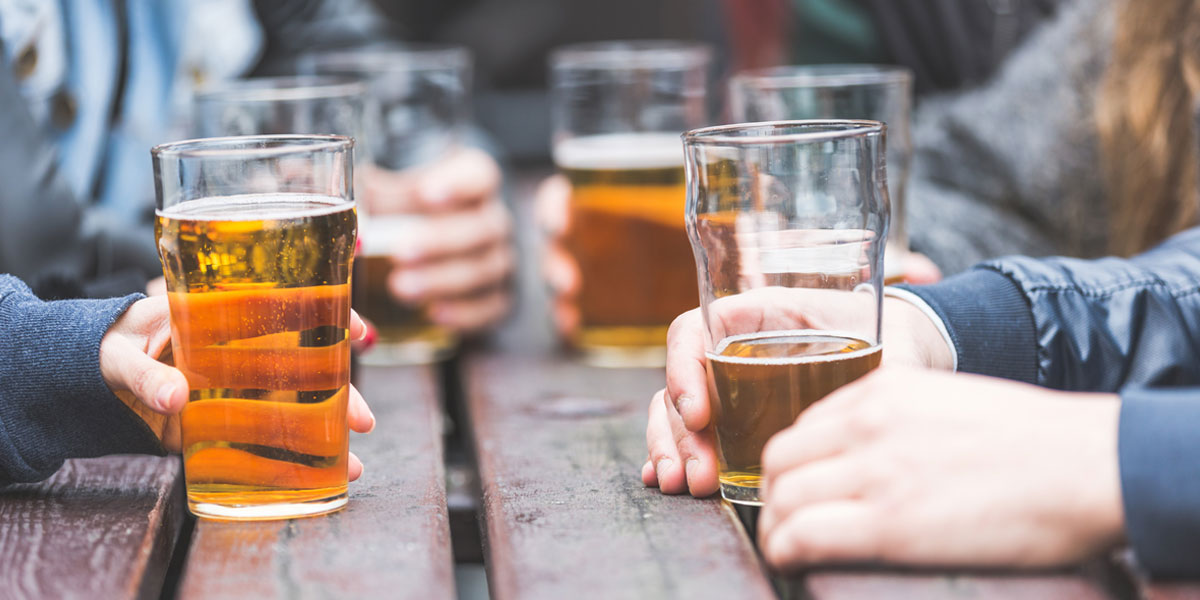 About 70 percent of adults reported that they drank alcohol in the past year, and 56 percent had a drink during the past month. That’s according to a 2015 National Survey on Drug Use and Health (NSDUH).

Some of those adults enjoyed an occasional glass of chardonnay with dinner. For others, “a drink or two” became more. Sometimes, a lot more. And that’s where problems begin.

Overall, Americans drink 50 percent more alcohol than the global average. About seven to 10 percent of North Americans suffer from alcohol use disorders that contribute to nearly 90,000 alcohol-related deaths every year.

Simply put: Alcohol is one of the most abused intoxicating substances with wide-ranging detrimental health repercussions.

We’re not entirely sure why some people can stop with a glass whereas others finish an entire bottle, develop serious alcohol-related health problems, and become addicted to alcohol.

Alcohol messes with your brain’s reward or “pleasure” systems, reinforcing those feelings so you eventually need more to get those same effects.

Genetics also impact those factors, as well as how your body breaks down and eliminates alcohol. Ultimately, any form of addiction becomes complicated and multifaceted. That doesn’t mean it’s not fixable.

Please note: Alcohol abuse can take numerous forms. If you believe you have a drinking problem, please seek professional support and help from a licensed Alcohol and Drug Counselor and/or healthcare practitioner. If you do not currently drink, please do not start because of any purported health benefits. As you will see, the drawbacks of alcohol far outweigh any benefits.

“But wait!” you say. You don’t abuse alcohol, and you don’t have a drinking problem. You’re a health-conscious person who enjoys a glass of Cabernet or maybe an after-dinner cocktail because alcohol can be pleasurable.

The Low Down on Alcohol Metabolism

Besides, isn’t drinking moderately healthy? The answer is maybe, with more than a few caveats.

Alcohol’s impact begins when you take that first sip. As a depressant, alcohol slows down the central nervous system, impairing things like motor coordination, reaction time, and intellectual performance.

When you drink, getting rid of alcohol becomes your body’s top priority. Everything else, including fat metabolism, takes a backseat because alcohol can be toxic in high enough doses. This promotes the development of fatty liver in heavy drinkers.

Your body can only metabolize a certain amount of alcohol every hour depending on many factors, including gender, liver size, overall nutrition, and body mass.

Genetic variations mean you also carry different versions of ADH and ALDH enzymes, which explains why some people break down alcohol more efficiently than others. Your ethnic background also influences your alcohol metabolism (for instance, some Asian people have difficulty metabolizing alcohol), what you eat (or if you eat), and your family history.

Men and women also metabolize alcohol differently. Women: if you wonder why those two Moscow Mules hit you harder than your male friend, you can attribute that to hormones, lower amounts of liver enzymes that break down alcohol, and less body water to dilute alcohol.

As a general rule of thumb, your liver can process one ounce of liquor or one standard drink per hour. Again, that amount will vary among individuals. More than that can accumulate in your blood and body tissues — hence the term “high blood alcohol concentrations” or intoxication — until the liver can metabolize it.

Long-Term Effects of Drinking Too Much Alcohol

When someone drinks too much, they might slur their speech. Their coordination could become impaired, behavior becomes more passive or aggressive than their usual personality, and they might blurt out something inappropriate.

The long-term effects of alcohol aren’t always so obvious. Your liver takes the biggest hiteventually leading to chronic liver inflammation and liver disease that impairs its ability to detoxify.

But drinking too much impacts nearly every organ, including your digestive system, heart, pancreas, and immune system. That impairs those vital organs’ ability to do critical things like digest food and regulate blood sugar levels.

Alcohol also shrinks your brain, and even one to two servings of alcohol daily can impact cognition and memory. You’re less likely to maintain long-term memories or make rational choices.

Over time, you can become more dependent on alcohol. You might find yourself reaching for a few glasses of wine regularly to take the edge off a stressful workday or habitually having a few beers with friends.

You might find you also need more alcohol to get the same effects. If you decide drinking has become a problem, you might resolve to quit, but eventually relapse. Alcohol can become addictive, and withdrawal can create its own symptoms and become life-threatening.

Worth repeating: If you struggle with alcohol use problems, please seek professional help. Breaking free from alcohol’s grip can be challenging, but there are people who can help you do it.

But again, you’re a health-focused person who enjoys that occasional glass of wine. How does that play a role in a healthy diet and lifestyle? Let’s look at five health factors and how alcohol impacts them.

Everyone handles alcohol differently. If you drink, consider how alcohol impacts you. Are you more likely to reach for dessert, say something you’ll later regret, blow off a workout, or struggle with a good night’s sleep after a few glasses of wine?

Can You Be Healthy and Still Drink Alcohol?

Although inconsistent and inconclusive, some earlier studies attributed moderate drinking to better health.

One meta-analysis of 34 studies defined moderate drinking as a few drinks a day — one or two for women and two to four for men. As a whole, moderate drinkers in that review lived a bit longer than those who didn’t drink.

But newer research suggests otherwise. The recent Global Burden of Diseases study, which looked at the health effects of alcohol among 195 countries from 1990 to 2016, concluded that the only amount of alcohol that was healthy was none. (Don’t shoot the messenger.)

So why did alcohol ever get a spotlight in health? You can attribute many of those purported benefits to red wine.

“Red wine has gotten a ton of press for its health-promoting abilities and has even been credited for something called the ‘French Paradox,’” says Bowden in The 150 Healthiest Foods on Earth. “The truth—as always—is a bit more complicated.”

The French Paradox, if you haven’t heard the term, was coined in the 1980s to describe how even though the French indulge in indulgences like cheese and red wine (sometimes lots of red wine), they have less heart disease.

The big sell for red wine’s health benefits comes from resveratrol, a polyphenol in grapes, blueberries, peanuts, a few other plant foods, and yes, red wine.

Researchers praise this compound’s benefits for heart, brain, metabolic, and age-related diseases. As a nutrient, resveratrol earns praise for its antioxidant and anti-inflammatory benefits.

Most clinical trials of resveratrol focus on cancer, neurological disorders, cardiovascular diseases, diabetes, non-alcoholic fatty liver disease (NAFLD), and obesity. Most (but not all) studies showed benefits but in therapeutic doses.

Unfortunately, you won’t get these therapeutic benefits of resveratrol from drinking red wine. According to Hyman, rats had “to consume an amount equivalent to what would be in 1,500 bottles of red wine to reap the benefits” of resveratrol. (Please don’t try this at home!)

Red wine doesn’t earn the limelight some people believe, and drinking alcohol seems all-around bad news for your overall health. But if you’re going out with friends tonight, and you know you will raise a toast with a drink or two, you want to stay healthy.

Put another way: You’re going to occasionally drink alcohol, and no study will convince you otherwise. How can you do it intelligently?

Your worst options include sugary alcoholic drinks like Cosmopolitans, which deliver a double whammy to your liver with alcohol and fructose (the most damaging sugar).

Other options such as beer contain food sensitivities, including gluten (unless you choose a gluten-free beer). While most straight liquors aren’t sweetened, mixing them with tonic water, diet soda, or other mixers add a big dose of sugar or artificial sweetener. (If you choose mixed drinks, use mineral water.)

Based on overall evidence, a glass of red wine becomes your best alcohol option. A five-ounce glass only contains about a gram of sugar along with a few nutrients. White wine is low in sugar too but contains fewer healthy plant compounds.

Worth repeating: Even though pinot noir, cabernet, and other red varieties contain some health-promoting resveratrol and a tiny amount of some nutrients, the drawbacks of drinking even red wine heavily outweigh any health benefits.

If you do drink, “know your pour.” Restaurants can be liberal mixing liquor in cocktails, and you can easily fit half a bottle or more of red wine into one generously sized glass. (Case in point.)

For the record, one serving of alcohol is:

And stay hydrated when you drink. Have at least two glasses of filtered water for every alcoholic beverage.

Ultimately, the science behind moderately drinking alcohol and staying healthy is complicated, contradictory, and inconclusive. Newer studies have some experts rethinking whether anyamount of alcohol can be healthy.

This evidence still won’t stop some people from drinking. If you feel like drinking moderately fits into your diet, know how you handle alcohol, choose the right type, and remember that moderate amounts might be less than you think.

“[A]lcohol is a double-edged sword: As the number of drinks you consume surpasses one or two daily, so, too, does your risk of mortality,” says Hyman. “People who drink the most have shorter life expectancies than those who abstain. In other words, a little bit of alcohol is generally better than none, but beyond that, there are no health benefits — only downsides.”